In Need of a Gutter Repair after Storm Gareth?

If you live in the UK, it can’t have escaped your notice that it’s been a bit stormy of late and in addition to laying waste to fence panels across the country, thousands of homeowners have seen their guttering damaged as a result and may be looking for a gutter repair. One of the main reasons for this is that most homes in Britain have standard plastic guttering, as house builders tend to choose it for their projects due to its relatively low cost.

However, the problem many face with low-quality plastic guttering is that it’s not great at standing up to the worst of the British weather, which seems to be getting worse every year. Here we take a look at just a few of the things you need to be doing to give your guttering a fighting chance of withstanding the next storm that hits and avoid the need for a gutter repair.

Typically speaking, you should be looking to have your guttering checked by a professional roughly once a year, but it’s advisable to give it a once over after a major storm like Storm Gareth to assess any possible damage. If you’ve been lucky and your guttering is intact, you’re not quite out of the woods, as it could still be blocked by debris, as could your downpipe.

A good way to check for blockages is to pop outside and see what’s happening to the water next time it rains. If the rainwater isn’t being channeled correctly and it’s spilling down the side of your house, you’ll more than likely have a blockage, which increases the chance of breakage – especially when talking about plastic guttering. The knock-on effect of broken or leaking guttering can be meaningful damage to your home, so it’s imperative to get it sorted out.

Another symptom of damage to your guttering is when it starts to sag, which usually happens when too much pressure has been placed upon it. This is often the result of blocked guttering, which then causes standing water to form, weighing everything down. In turn, this puts pressure on the brackets and the screws that hold them up. A quick visual check is typically enough to determine whether your guttering is sagging.

If you spot any of the aforementioned damage, you’re going to need gutter repair work doing and that is when you have a choice to make. More of the same or something better?

All of the issues we’ve spoken about so far, relate to homes that have inexpensive, plastic guttering, which isn’t exactly known for its durability. At the Seamless Guttering Company, we supply high quality, seamless aluminium guttering that offers a range of advantages over the plastic variety.

When you invest in aluminium guttering for your property, you will likely pay more than you would if you chose plastic guttering, but in terms of durability, there’s no real comparison to be made. Well maintained aluminium guttering will last you for years and years, even if it gets hit time after time by storms like those seen recently. And the fact that it’s seamless means it’s much less prone to leaks. Over the course of its lifecycle, aluminium guttering is by far the most cost effective option especially as the need for a gutter repair is highly unlikely.

So, before you go and replace your broken plastic guttering with more of the same, we recommend that you consider installing seamless aluminium guttering, as it’s value will keep paying you back year after year.

Give us a call now on 01621 776228 and speak to our friendly team about your guttering needs. You won’t get a sales pitch, just honest, impartial advice. Alternatively, you can visit us online at www.seamlessgutteringcompany.co.uk for more details. 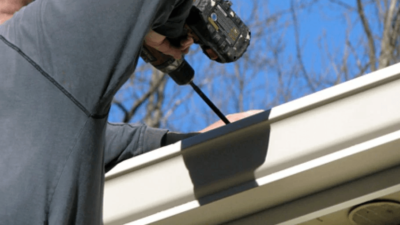